I tried installing django-cms, an open-source project from Switzerland's company Divio. It is a content management system based on the web framework Django and is written in Python.

Among the interesting features of DjangoCms (besides the fact that it is based on django, which I happen to have fun with in most of my programming work):

It's quite interesting to check out the other alternatives too, if you want a django-based CMS. This comparison webpage has all the info you need.

Getting to the meaty part: here are the steps I followed during installation:

1. went to gitHub and tried to install the latest version available (2.1.0.beta2). Tried to run the example app within that package, but it was throwing too many errors so I decided to go for the 2.0 stable release (django-cms-2.0.0.final.tar.gz).

2. This version worked fine, I just had to set the MEDIA directory giving using the full path on my machine, and remove all references to 'South' and 'Reversion' django apps (in 'installed apps') cause I don't use them.

4. That's it. Go to /admin, set up some pages, add content and see the result.

The templates that come by default are good at giving you an idea of how the information is structured and retrieve, but they are a bit messy in my opinion. So I created my own template and added it to the default ones (all the info on how to do this on the official docs) 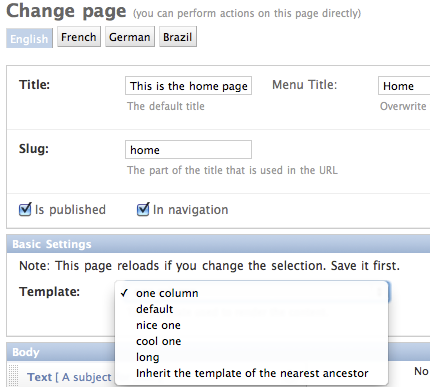 The end result: not a masterwork, but a decent starting point for certain!

Other places online where you might find useful django-cms tips:

That's it for now. I like very much the plugin architecture (plugins or extensions can be downloaded here), maybe I'll be posting some more about that in the future...