Mathematics and our body

"Where Mathematics Comes From: How the Embodied Mind Brings Mathematics into Being" [amazon link] is a recent book by cognitive scientists George Lakoff and Rafael Nuñez, in which they argue that the origin of our mathematical ideas (even the most abstract and immaterial) is to be found in the materiality of our everyday experience. That is to say, in the body. 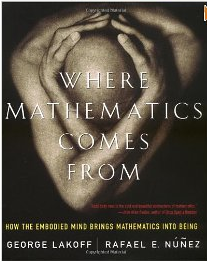 Not entirely a new idea, but the detailed analysis of the two authors (who are world-recognised experts in their fields) makes the argument particularly poignant and eloquent. A few key excerpts from the book's preface (bold font is mine):

Mathematics is seen as the epitome of precision, manifested in the use of symbols in calculation and in formal proofs. Symbols are, of course, just symbols, not ideas. The intellectual content of mathematics lies in its ideas, not in the symbols themselves. In short, the intellectual content of mathematics does not lie where the mathematical rigor can be most easily seen — namely, in the symbols. Rather, it lies in human ideas. But mathematics by itself does not and cannot empirically study human ideas; human cognition is simply not its subject matter. It is up to cognitive science and the neurosciences to do what mathematics itself cannot do — namely, apply the science of mind to human mathematical ideas. That is the purpose of this book.

The central question we ask is this: How can cognitive science bring systematic scientific rigor to the realm of human mathematical ideas, which lies outside the rigor of mathematics itself? Our job is to help make precise what mathematics itself cannot—the nature of mathematical ideas. Rafael Nunez brings to this effort a background in mathematics education, the development of mathematical ideas in children, the study of mathematics in indigenous cultures around the world, and the investigation of the foundations of embodied cognition. George Lakoff is a major researcher in human conceptual systems, known for his research in natural-language semantics, his work on the embodiment of mind, and his discovery of the basic mechanisms of everyday metaphorical thought.

One might think that the best way to understand mathematical ideas would be simply to ask mathematicians what they are thinking. Indeed, many famous mathematicians, such as Descartes, Boole, Dedekind, Poincaré, Cantor, and Weyl, applied this method to themselves, introspecting about their own thoughts. Contemporary research on the mind shows that as valuable a method as this can be, it can at best tell a partial and not fully accurate story. Most of our thought and our systems of concepts are part of the cognitive unconscious (see Chapter 2). We human beings have no direct access to our deepest forms of understanding. The analytic techniques of cognitive science are necessary if we are to understand how we understand.

One of the great findings of cognitive science is that our ideas are shaped by our bodily experiences — not in any simpleminded one-to-one way but indirectly, through the grounding of our entire conceptual system in everyday life. The cognitive perspective forces us to ask, Is the system of mathematical ideas also grounded indirectly in bodily experiences? And if so, exactly how? The answer to questions as deep as these requires an understanding of the cognitive superstructure of a whole nexus of mathematical ideas. This book is concerned with how such cognitive superstructures are built up, starting for the most part with the commonest of physical experiences.

Michele Pasin. Mathematics and our body. Blog post on www.michelepasin.org. Published on Oct. 7, 2010.


blog  Mathematics and our body