I've been very reluctant to buy the Amazon Kindle at first, but since I got it I've realized more and more that that was the right decision, and I'll tell you why. The other worthy candidate of my hard sweated money was Apple's iPad - which at first sight looks much cooler and more versatile. But did I really need all of that cpu power? I already have two macs and an iPhone, so the fanaticism alarm bell kept me from rushing to the Apple-store this time. And here's why: 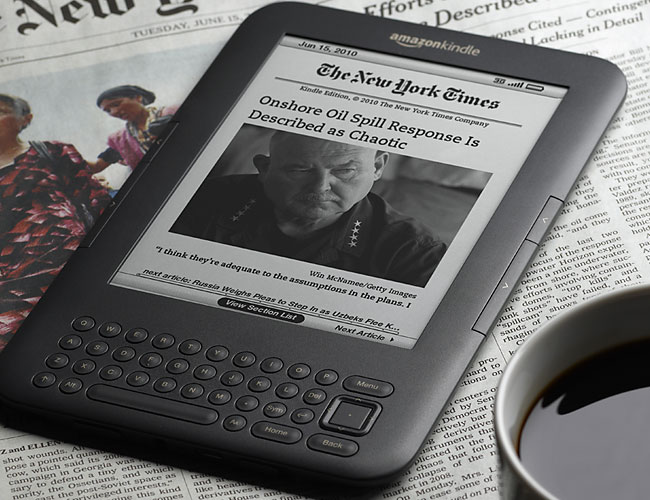 1. Reading on the go: honestly, after sitting down for a while and asking myself WHY ANOTHER GADGET I came to the conclusion that that's the main reason for wanting a big iphone (so to say). I have lots of pdf's, and spend a lot of time on trains, planes, etc. so having a portable reading device that integrates well with my lifestyle has long been a desire (almost a necessity, I'd say) for me. Both the Kindle and the iPad support this well enough. So we're even here.

2. Weight: if you're carrying around a mobile reader of some sort, you want it to be as light as possible. Here the kindle just wins: 240 g for the Kindle3 WiFi, vs 680 g for the iPad Wifi (the 3G is 50 grams heavier). In a nutshell: the Kindle is amazingly light !!!

3. Battery life: again, do you want a mobile device, or a mobile device + a charger you always have to pack with you + worries about where to recharge its batteries? The Kindle offers 1 month of battery life (officially); more realistically, a bit less I'm tended to think. I can say I already used it for two weeks, reading several hours every day and browsing the internet too (and apparently it takes a few charge cycles for the battery to reach full capacity). So no worries here. The iPad instead, 10 hours or slightly more.... Mmmmm.....

4. Internet: both have WiFi, but the iPad offers a much more compelling experience (colors, interaction etc.). However, when it comes to 3G the Kindle offer a formula that was new to me: after the initial purchase, you won't spend any money on connectivity. Yes, sounds incredible but true: Amazon pays for Kindle’s 3G wireless connectivity, with no monthly fees or commitments. And this is valid in over 100 countries and territories, . This feature was a winner for me: if I'm on the move, I either want no internet whatsoever (= I'm trying to stay away from work) in which case the iPhone is more than enough; if not, I'd probably take my laptop so that I can both surf the web and do a thousand other work-related things too. Kindle's 3G support matches well with both situations, so here we go. Kindle won for me here.

4. Simplicity: I spend most of my working hours in front of a computer, then often go home and play/do music using a computer, maybe watch a movie in the evening using a computer. Do I really fancy having another computer? Definitely not. Especially because one of the major virtues of computers, that is, the fact that they are 'abstract machines' that can run a possibly infinite range of softwares, turns into a nightmare-feature when it comes to updating these softwares, fixing settings and dealing with a never ending series of other smaller issues that inevitably come up. Having matured some experience with the iPhone, I know already that the iPad will suck up my time this way too. While instead the Kindle is so simple (just a text reader, really) that maintenance is almost non existing. Ergo, Kindle wins here for me..

5. Price: last but definitely not least! It's just a hundred pounds for the non-wifi Kindle, and a hundred-forty for the wifi one. iPad starts at 499 right?

In conclusion: I guess that the main constraint for me was the fact that I essentially wanted a reading-device for when I'm traveling. All the rest is a pleasant extra, but still, just an extra. The iPad is very attractive, sleek, powerful etc .. it's definitely comparable to a laptop if you consider the range of things you can do with it. But if you already have a laptop... well you know my answer now!

Hope this can be of some help to other undecided buyers - cheers!