A Random Walk through the 20th Century

I wanted to post something about this for a long time, but never got down to it. A random walk through the 20th century is an older narrative/hypermedia system (it dates back to 1996) realized by a bunch of people in MIT around the influence/direction of Glorianna Davenport.

This hyper-portrait introduces the audience to a remarkable man whose life centered on science, government, ecucation and issues of cultural humanism. Early in his career, Jerome Wiesner developed an audio recording laboratory at the Library of Congress and travelled extensively throughout America, capturing folk music by native performers. He directed MIT's Research Lab for Electronics during the Cold War, served as National Science Advisor to John F. Kennedy, and eventually became President of MIT. After the end of World War II, Wiesner became a prominent advocate of disarmament and was a key player in negotiating the first Nuclear Test Ban Treaty.

In this hyper portrait (which runs on the World Wide Web), we invite viewers to explore the Twentieth Centurey through an extensible collection of stories about and recollections by the central figure. We also invite viewers who knew JBW to share a memorable story with our growing society of audience. 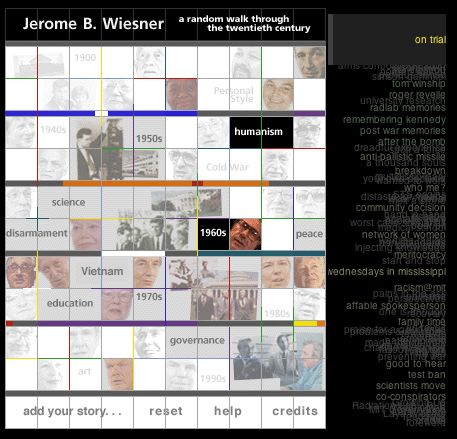 The flash-looking navigation interface is inviting and entertaining, I must say.

A few things moving on the left hand side and a matrix-inspired selection menu give pretty well the idea of an input mechanism that allows to combine different video, audio and textual resources into a new narrative.

It's all done in Java. However, setting aside the technological aspects (ps wonder what these guys think, nowadays, about ontology-based navigation) - I wonder if this unlimited freedom of moving around the topics provided could end up being detrimental to the learning / exploration process.

That is, I wonder if the decision to not present the user with the rationale of the narrative could be a limitation. Is the sequence of resources ordered according to a predefined purpose? Or just some sort of similarity? Sometimes the resources have no caption or description, so that makes it even more difficult to contextualize them within the whole.

Michele Pasin. A Random Walk through the 20th Century. Blog post on www.michelepasin.org. Published on July 19, 2006.