Here're the materials related to the second week of the Introduction to Infographics and Data Visualization online course. This week we talked about two topics: a) Visual Perception and Graphic Design Principles and b) Planning for Infographics and Visualizations. The exercise was focusing on an interactive visualisation available on the New York Times website.

Main principles of Graphic Design Unity: presentation of a composition as an integrated whole Variety: is the opposite of unity, but also its complement. With too much variety, a composition will look randoml with too much unity, it will look boring Hierarchy: the balance between unity and variety can lead to a good hierarchy - answers the question: where should I start reading the infographics

Grids - they can support unity thanks to a sense of alignment - help keep the consistency - key to using grids: think of the composition as a set of rectangles - first step in building an infographics: divide up the space into functional rectabgles - headline / intro / map / chart / timeline etc... - tip: things that are stacked on top of each other should have the same width - tip: if objects are side by side, they should have they same height

Fonts, Colors - different fonts can be use to achieve variety, and support the creation of a hierarchy - same with colors: eg using a Copy Color (eg Black) an highlight color (eg yellow) and a series of Neutral Tones (grey shades)

B) Planning for Infographics and Visualizations 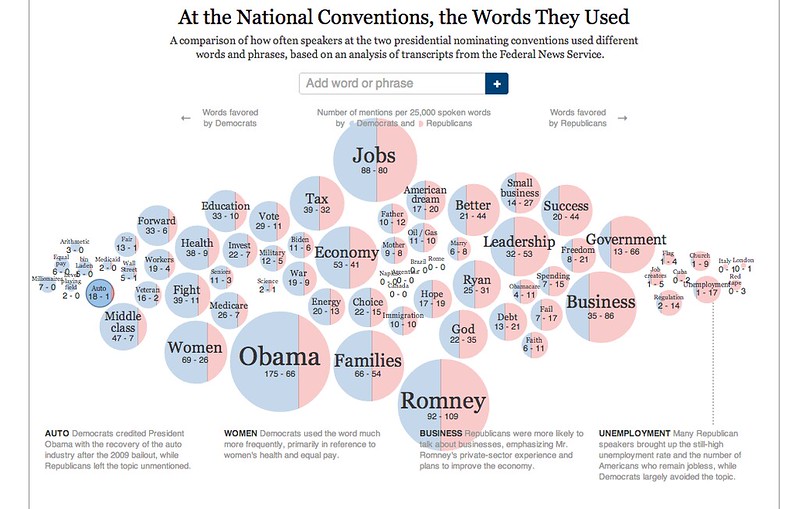 See the following graphic, by The New York Times, an interesting project that allows you to compare the words that were used in the National conventions. Imagine that you are hired by Steve Duenes, infographics director at the Times, to make a constructive critique of that piece. What would you say about it?

Here's my comments about the NY visualization:

- The infographics allows to compare the two different parties usage of a certain word rather intuitively, so in that sense it is functional. The visualisation based on bubbles’ areas is usually clear; in cases where the two areas are very similar you can still get the ratio right thanks to the percentage numbers displayed.

- The fact that you can move around the bubbles is eye-catching and fun to use, but it fails to provide any added value to the tool (= no extra functionality other than maybe organising the words some other way). This is detrimental to the understanding of the structure and purpose of the visualisation: the bubbles’ location seem to imply a semantic correlation of some sort, but unfortunately it doesn’t have any.

- I’d expect to be able to filter the quotes by speaker, so  to compare the usage of a certain word only between two specified people (e.g. Obama and Romney). Unfortunately that is not possible. Also, it’d be nice to be able to order or re-organise the citations on a timeline, so to explore potential patterns in the increase/decrease of use of a word. All of this could be easily achievable by introducing  a ‘filter by’ panel right on top of the the quotations columns. The types of filters could be others too, eg geographical ones (by state or regions), or by the importance of the ‘roles’ of the speakers (majors, governors).

- The main issue from the interactivity point of view is that when you click on a bubble (assuming a user understands that’s what he/she has to do - btw no tooltips at all!) it’s not immediately obvious that the bottom part of the screen gets updated. I’d add some mechanism, such as a partial screen refresh, or a ‘loading’ icon, that would make this process more transparent.

- There is no way to remove a bubble once you’ve added it. So if you’re trying to compose your own ‘view’ of the tool by selecting only words you are interested in, once you get something wrong you’ve stuck with it (you can only restart from scratch by reloading the page)

- The 4 static captions at the bottom (AUTO, WOMEN etc..) are ok at the beginning of the visualisation, but once you start moving things around they don’t update at all which is not really the expected behaviour.

- If the full transcripts the quotations derive from are available online, it’d be nice to be able to link directly to them e.g. by clicking on the quotations themselves. This would allow to investigate further the original context of use of a word.

- Having small photos on the side of a speaker’s name would make it easier to identify these people; also, it shouldn’t be too difficult to include links to the person’s home pages or wikipedia entries.