It's been three days that I'm struggling with concepts of content, form, representation and so on.. I wonder whether there's a well-formalized theory of representations out there.. the one in DOLCE is a useful design pattern, but I'm still reluctant to say that it is complete (I hope I'll find out to be wrong). Another clever view of the issue can be found in a tutorial by Richiiro Mizoguchi, and this is what this post is about.

In this tutorial Mizoguchi talks about representation - represented-thing - representational-form etc.. No mention of information-objects, which are instead (only as a term, maybe) always present everywhere else (Dolce, Cidoc, Cyc). So what's the proper mapping? Is an IO a representation? Moreover, I am trying to put also another model in the picture, FRBR. This bibliographic standard focuses around concepts such as work, expression and manifestation, mainly. So how do these come into the game?

Sometimes I end up in some sort of ontological relativism. Since the objects we study are essentially multidimensional, and since we humans can only rationally perceive a portion of such dimensions at a given time, it follows that whatever perspective we decide to take on our objects of investigation, it will be fundamentally arbitrary and partial. In other words, there is no chance of having a single unifying perspective on reality, one which can contain all the others. No chance. So every representation gives you one side of the story only - which can be related to other sides, but never in its entirety. If this is the case, we better keep all the possible 'sides' of this story, and just use the one we need whenever we need it. A pragmatist approach? Well.. more on this to come soon! (i'd also like to go back to Peirce, and check how all of this relates to his work)

Back to us: this is the model used in Dolce (more precisely, in the DnS module of Dolce, as described in Gangemi, A., Borgo, S., & Catenacci, C. (2005). Metokis deliverable D07 - Task Taxonomies for Knowledge Content. Deliverable of the EU FP6 project Metokis): 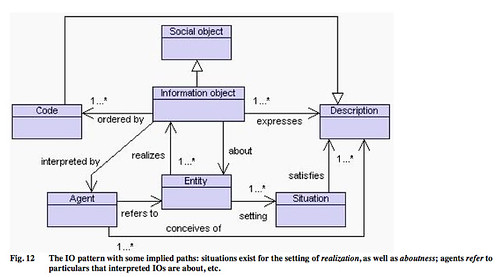 And this is an example of its instantiation:

A representation is composed of two parts, form and content.

This is a quite impressive visual rendering of this ontological theory: 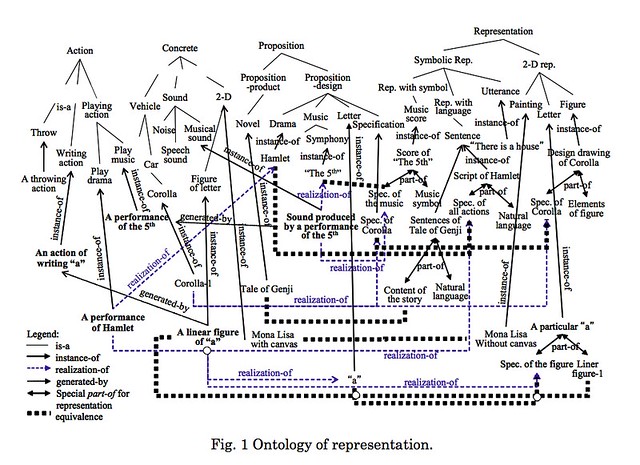 How are these theories different from each other? What are their pros and cons, where is it that they could be used more successfully? There's work to be done here..