Working toward meritocracy in Italy

It's no news that thousands of italian researchers left their home-country in order to be able to carry on doing what they like; the news though is that now we're got also a scientific study shedding some light on the phenomena. It's been done by the Via Academy, an association dedicated to the creation of statistical analyses of the research outputs of italians (which are published on the TIS reports website).

Clearly, the high impact of scientists who are now abroad bears testament to the quality of the Italian education and attitude when it comes to Computer Science. The inevitable question thus arises: why are Computer Scientists who work in Italy not among the top in either the world ranking or the TIS list? I have been asking this question to various colleagues in the field, both inside and outside the Via-academy network. The consistent answer I have been receiving is that there is a clear disadvantage Computer Scientists must face when working in Italy with respect to their colleagues who work abroad. This disadvantage derives from a mixture of excessive teaching duties, a lack of large-scale funding and a limited recognition of scientific merit

Recent reports include the "Top 100 researchers- home & abroad" (which includes the quotation above) and the "Top 50 Italian Institutes".

The H-method: a first step towards meritocracy

This type of analyses are mainly based on the H-index method (an index that attempts to measure both the productivity and impact of the published work of a scientist or scholar); it therefore suffers from various limitations deriving from factors such as the difference in average number of publications among disciplines (especially, between science and the humanities), or from the fact that it's a purely quantitative analysis.

However, it seems to me as being an important step in the right direction: meritocracy.

p.s. I found out there's a recent article by Ignazio Marino on the topic [Working Toward Meritocracy in Italy, Ignazio R. Marino, Science 6 June 2008: 1289]; I couldn't download it but here's a short commentary on it I could find online: 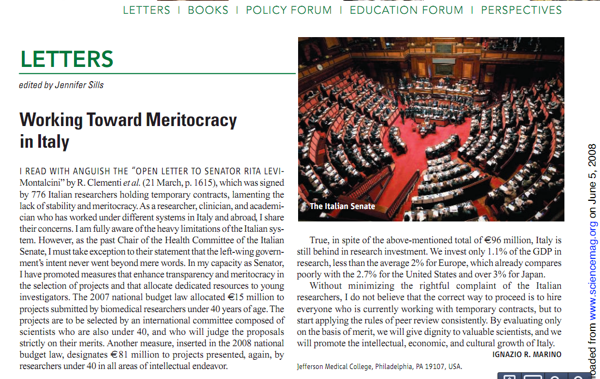 
paper  Factoid-based Prosopography and Computer Ontologies: towards an integrated approach


blog  Towards a conceptual model for the domain of sculpture


paper  Prosopography and Computer Ontologies: towards a formal representation of the ‘factoid’ model by means of CIDOC-CRM


blog  Working toward meritocracy in Italy


blog  Satire you won't be able to listen to in Italy


paper  Paving the way towards the e-humanities: a Semantic Web approach to support the learning of philosophy