Crowdsourcing interpretation with Prism, a new software from the Scholar's Lab

Prism is a new online tool by the Scholars' Lab at the university of Virginia. In a nutshell, Prism lets users independently highlight and annotate passages from a text, for then mashing up all of these highlights into a new version of the text where the 'importance' of certain passages is rendered graphically via colours and font sizes. 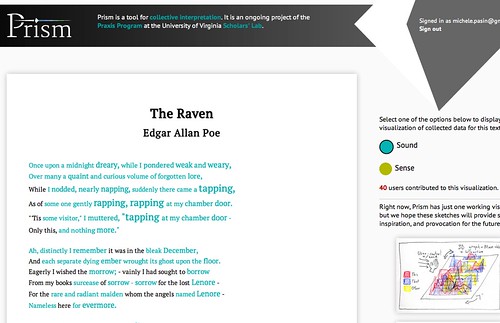 Prism is presented as

... a tool for "crowdsourcing interpretation." The concept emerged from a decade-long conversation on categories of textual interpretation which took place at the University of Virginia, and specifically from transparency mark-up games designed by Bethany Nowviskie for her Media Studies students and her colleagues in SpecLab.

The concept of crowdsourcing interpretation is definitely a fascinating one; maybe the end result of Prism a little less so, at the moment. Simply merging different people's highlights can be visually interesting, but at the same time not very useful from a scholarly point of view I think. Overall, it seems to me like an indiscriminate association of possibly very different viewpoints.

..the end goal of Prism is to produce aesthetic provocations, that is, visualizations which provoke further discussion. Prism expands upon current notions of crowdsourcing to allow for more meaningful interaction with "the crowd." Users interact subjectively with a text and contribute to a collective interpretive energy that has infinite possibilities beyond the highlighting exercise itself

Despite the fact it's still early days for Prism, it seems to me that this is potentially the beginning of a new research field (cf. this post too: Future possibilities for Prism), so I'm really curious to see how it'll develop. I have the feeling that just by adding a few more controls (e.g. filtering highlights/annotations by users group, or mechanisms for tagging/categorising passages) the final visualisation of the text could become a really powerful tool for exploration and learning.

Think for example of a classroom scenario: groups of students could focus on different facets of an author, annotate what's relevant with respect to that facet, and eventually explore what the other groups have annotated in the text (and how it overlaps with their own annotations). All of this could be achieved just by playing with the interactive controls of the final visualization . Another interesting scenario could be a single-user context: when you study a text, it's not uncommon to find new elements of interest each time you read the text, maybe because your goals have changed, or simply because you are in a completely different mood. Using an enhanced version of Prism it'd be possible to see the evolution of your notes chronologically, and maybe re-consider them in association to other contextual information you might have stored elsewhere (e.g. about other readings you were doing at the time).

In conclusion: will crowd-sourced interpretations change the way we read texts? We're not really there yet, but definitely going in the right direction!

Michele Pasin. Crowdsourcing interpretation with Prism, a new software from the Scholar's Lab. Blog post on www.michelepasin.org. Published on June 1, 2012.


blog  Recipe: Making a livecoding screencast with QuickTime and RecordIt


blog  Another experiment with Wittgenstein's Tractatus


blog  How to visualize a big taxonomy within a single webpage?


blog  Annotating the web with Scrible


blog  Crowdsourcing interpretation with Prism, a new software from the Scholar's Lab


blog  An alternative to the 'play' macro: 'iplay' and 'with-instrument'


paper  How do philosophers think their own discipline? Reports from a knowledge elicitation experiment


blog  Impromptu: access the Wiki docs from the editor


blog  Freeze any webapp with Fluid


blog  Layer the web with Blerp!


blog  AJAX in Lisp with JQuery


blog  Dear old paper, how could we do without you?