Based on one of the examples packaged with Impromptu, I wrote a simple function that uses the objc bridge to create a bare-bones user interface for adjusting your audio instruments master volumes.

The script assumes that your audio graph includes a mixer object called *mixer*. The UI controllers are tied to that mixer's input buses gain value.

The objc bridge commands are based on the silly-synth example that comes with the default impromptu package. 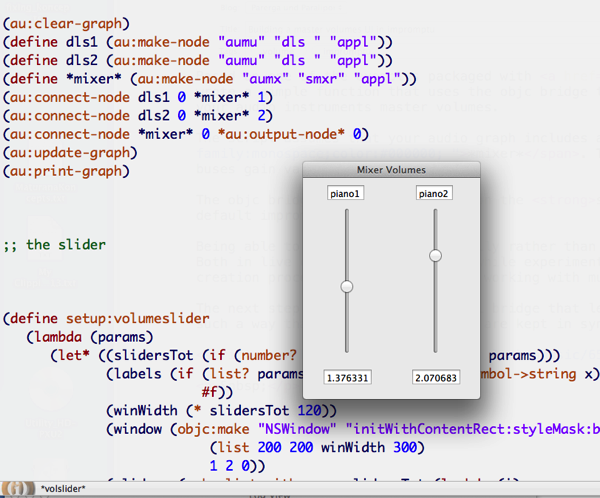 Being able to control volumes manually rather than programmatically made a great difference for me. Both in live coding situations and while experimenting on my own, it totally speeds up the music creation process and the ability of working with multiple melodic lines.

The next step would be to add a midi bridge that lets you control the UI using an external device, in such a way that the two controllers are kept in sync too. Enjoy!

P.s.: this is included in the https://github.com/lambdamusic/ImpromptuLibs


blog  Another experiment with Wittgenstein's Tractatus


blog  How to visualize a big taxonomy within a single webpage?


blog  Annotating the web with Scrible


blog  A metronome object for Impromptu


blog  Crowdsourcing interpretation with Prism, a new software from the Scholar's Lab


blog  An alternative to the 'play' macro: 'iplay' and 'with-instrument'


blog  Impromptu: access the Wiki docs from the editor


blog  Graphics over code in Impromptu


blog  Freeze any webapp with Fluid


blog  Layer the web with Blerp!


blog  AJAX in Lisp with JQuery


blog  Dear old paper, how could we do without you?