Hello there data lovers! In this post you can find some information on how to download and make some sense of the scholarly dataset recently made available by the Springer Nature SciGraph project, by using the freely available Elasticsearch suite of software.

A few weeks ago the SciGraph dataset was released (full disclosure: I'm part of the team who did that!). This is a high quality dataset containing metadata and abstracts about scientific articles published by Springer Nature, research grants related to them plus other classifications of this content.

This release of the dataset includes the last 5 years of content - that's already an impressive 32 gigs of data you can get your hands on. So in this post I'm going to show how to do that, in particular by transforming the data from the RDF graph format they come with, into a JSON format which is more suited for application development and analytics.

We will be using two free-to-download products, GraphDB and Elasticsearch, so you'll have to install them if you haven't got them already. But no worries, that's pretty straighforward, as you'll see below.

First things first, we want to get hold of the SciGraph RDF datasets of course. That's pretty easy, just head over to the SciGraph downloads page and get the following datasets:

That's pretty much everything, only thing we're getting only one year worth of articles as that's enough for the purpose of this exercise (~300k articles from 2016).

Next up, we want to get a couple of other datasets SciGraph depends on:

That's it! Time for a cup of coffee.

2. Python to the help

We will be doing a bit of data manipulation  in the next sections and Python is a great language for that sort of thing. Here's what we need to get going:

So, you should have by now 8 different files containing data (after step 1 above). Make sure they're all in the same folder and that all of them have been unzipped (if needed), then head over to the GraphDB website and download the free version of the triplestore (you may have to sign up first).

The online documentation for GraphDB is pretty good, so it should be easy to get it up and running. In essence, you have to do the following steps:

Next thing, we want a script to load our RDF files into this empty repository. So cd into the directory containg the GitHub project (from step 2) and run the following command:

So, to recap: this script is now loading more than 35 million triples into your local graph database. Don't be surprised if it'll take some time (in particular the 'articles-2016' dataset, by far the biggest) so it's time to take a break or do something else.

Once the process it's finished, you should be able to explore your data via the GraphDB workbench.  It'll look something like this: 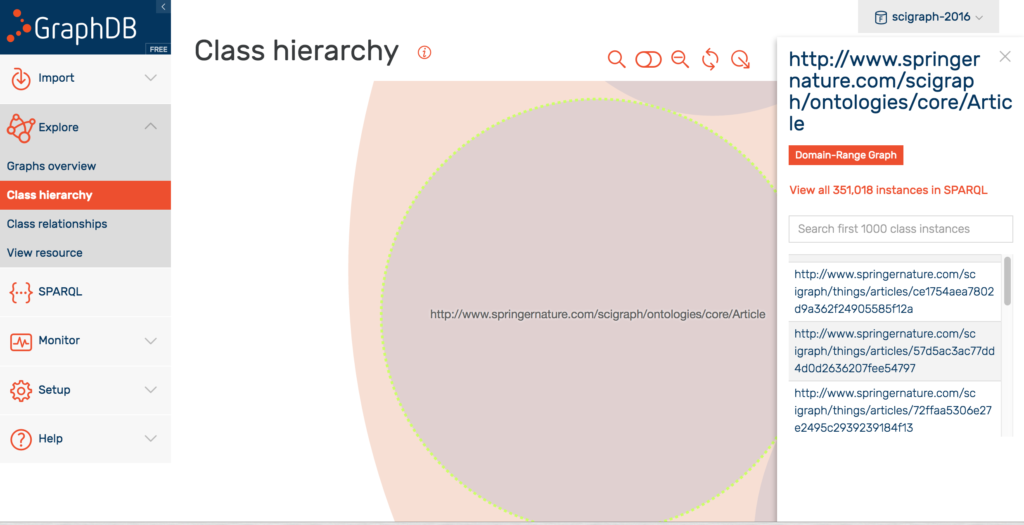 We're almost there. Let's head over to the Elasticsearch website and download it. Elasticsearch is a powerful, distributed, JSON-based search and analytics engine so we'll be using it to build an analytics dashboard for the SciGraph data.

Make sure Elastic is running (run bin/elasticsearch (or bin\elasticsearch.bat on Windows), then cd into the hello-scigraph Python project (from step 2) in order to run the following script:

If you take a look at the source code, you'll see that the script does the following:

Two more things to point out:

That's it! Time for another break  now. A pretty long one actually - loading all the data took around 10 hours on my (rather averaged spec'ed) laptop so you may want to do that overnight or get hold of a faster machine/server.

Eventually, once the loading script is finished, you can issue this command from the command line to see how much data you've loaded into the Elastic index  "hello-scigraph". Bravo!

5. Analyzing the data with Kibana

Loading the data in Elastic already opens up a number of possibilites - check out the search APIs for some ideas - however there's an even quicker way to analyze the data: Kibana. Kibana is another free product in the Elastic Search suite, which provides an extensible user interface for configuring and managing all aspects of the Elastic Stack.

So let's get started with Kibana: download it and set it up using the online instructions, then point your browser at http://localhost:5601 .

You'll get to the Kibana dashboard which shows the index we just created. Here you can perform any kind of searches and see the raw data as JSON.

What's even more interesting is the visualization tab. Results of searches can be rendered as line chart, pie charts etc.. and more dimensions can be added via 'buckets'. See below for some quick examples, but really, the possibilities are endless!

This post should have given you enough to realise that:

Hope this was fun, any questions or comments, you know the drill :-)


blog  A bookmarklet for searching delicious


blog  Zotero - is the browser enough to do research?